When your Microsoft surface pen plays up… 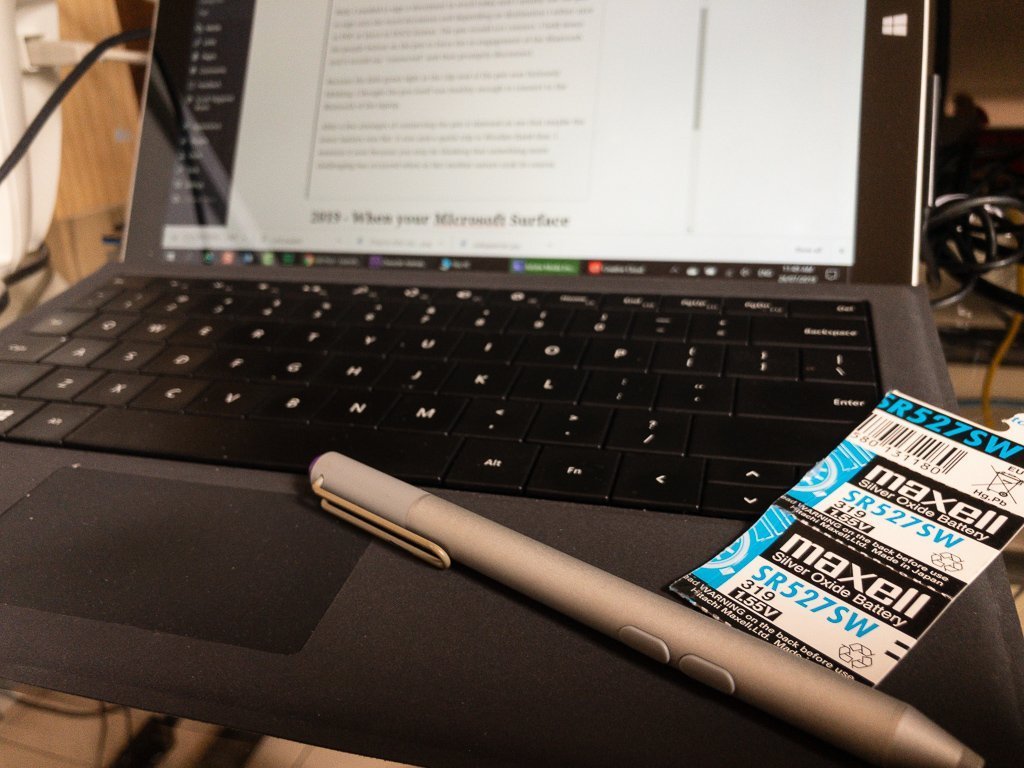 I Started this post in 2016 – and it has been languishing in Draft ever since then. An event occurred a week ago which caused me to reflect on this… Remember the draft below was written in 2016… BTW there is a 2019 update in this story…

2016 – When your MIcrosoft Surface Pen plays up

I have been using a surface pro 3 for I think about two years. It is my primary computer for Adobe editing through to preparing reports in cramped airline seats. It has been back to the doctor once when it (the tablet) refused to recognise the keyboard. Every now and then the pen goes on the blink and it is important that you know what is inside the pen.

Normally when you click once on the purple end of the pen, it starts up OneNote. There are two small button batteries in the end of the pen that handle this. I have never seen them, but there will be a day when I will need to change them.

At the business end of the pen (the pointy end) there is an AAAA battery which as you may expect is yet smaller than an AAA battery.

Well, I needed to sign a document in word today and I usually use the pen to sign onto the word document and depending on destination I either save as PDF or leave in DOCX format. The pen would not connect. I held down the purple button on the pen to force the re-engagement of the Bluetooth and it would say “connected” and then promptly disconnect.

Because the little green light at the clip end of the pen was furiously blinking, I thought the pen itself was healthy enough to connect to the Bluetooth of the laptop.

After a few attempts of connecting the pen it dawned on me that maybe the lower battery was flat. It was and a quick trip to Woolies fixed that. I mention it now because you may be thinking that something more challenging has occurred when in fact mother nature took its course.

2019 – When your MIcrosoft Surface Pen plays up (again)

So – for a number of odd reasons, I was reunited with the same Microsoft Pen and couldnt connect it to the surface. This time, press as hard as could on the purple end of the pen, no flashing green light to tell me that the pen was in pairing mode. Then I remembered those little tiny cell batteries in the end of the pen.

I unscrewed the end and saw them. Using a magnifying glass I determined that they were Enegeriser 319 batteries. I hunted high and low, including calling a great battery store in Flemington which provides great replacement camera batteries.

When I googled these little batteries, I found they were also used in watches – more importantly, I didn’t have to buy an energizer 319, there was an equvilent battery (exact size, voltage etc) from Maxell.

So after a bowl of Bun Bo Hue (spicy Vietnamese noodles) from Co Do – a restaurant famous in Sunshine, Melbourne for this dish, I popped into a small watch repair shop and after a minute or so, the batteries emerged – $5 for two and I was on my way. In Melbourne, these small batteries are sometimes more easily sourced from your small “2 Dollar Shop” who seem to have multiple sheets of different kinds of cell batteries.