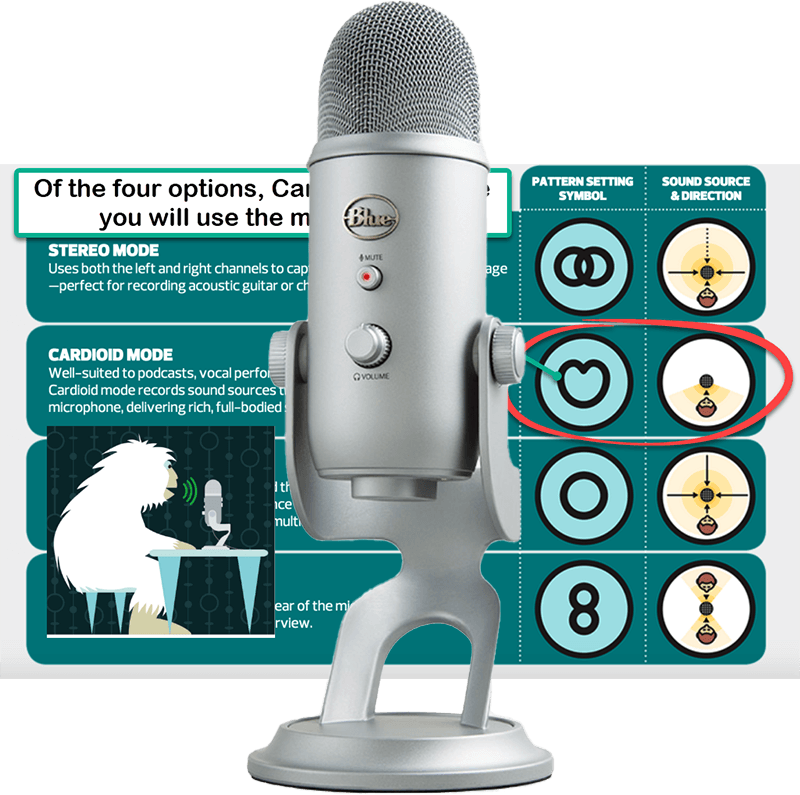 I love my Blue Yeti microphone and although these microphones are pretty easy to use, the other day I was watching a webinar and the guy was sitting on the edge of his desk looking like he was talking into a Yeti microphone.

I say “looking like” because he had the microphone around the wrong way and was pointing the tip to his mouth… Clearly he hadn’t read the manual.

So I thought seeing as we have recently awarded three of these microphones to our incredibly cool video competition winners in the Northern Territory – North, South and Remote. You can check out all the great entries here.

Then on the back of the microphone are the two knobs that select the amount of gain (recording volume) you set the microphone at. You shouldn’t need to go past the middle point (black line pointing to the top) for the gain and the other dial selects the recording pattern and you can see from the chart below the pattern setting and where the microphone records from.

Finally, when you record, sometimes you will have “plosives” which is the popping sound you get from words that start with P. The letter S can also be a culprit. To avoid that, you can use or make a pop filter. I think making one is a fun class activity, although you can pick one up for less than 30 dollars.

You can use Adobe Spark Video, Audacity and other free programs to record your audio and for powerful editing tools, Adobe Audition is great and here is a great webinar I recently watched on how to create your podcasting template for Audition from scratch. There is an inbuilt one which is great, but by building your own you get to understand more about audio in general and podcasts and audition specifically.

I do record podcasts about technology occasionally and you can check them out or subscribe to them here.

Editor’s Note: I didn’t realise that Logitech has acquired Blue Yeti and it appears that during this new normal of operating from home that Logitech has been acquiring companies like Blue and I think that is a good thing as Logitech is a big player in the gaming peripherals space – not to mention office and home peripherals.